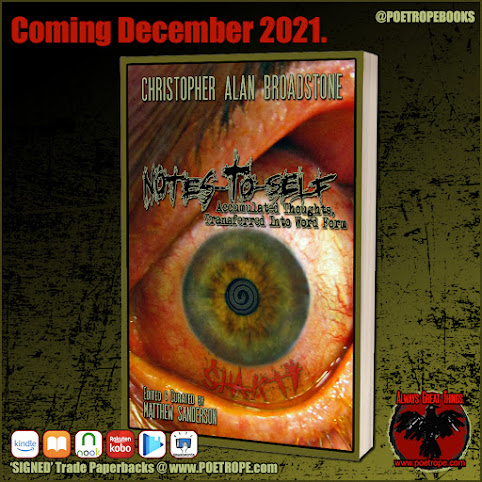 NOTES-TO-SELF:
Accumulated Thoughts, Transferred Into Word Form
By Christopher Alan Broadstone
Edited & Curated by Matthew Sanderson
This is an historical collection of works that comprises Broadstone’s long out-of-print, handmade, ABOUT 9 TIMES fan-book titled ‘BEYOND BLUE SKY, NOTHING’, which included an amalgam of over 100 early poems (many of them ’9x’ lyrics), along with two early short stories, ‘THE DEFORMITY’ and ‘AGAIN ONCE MORE’.

New to this edition are the never released, very early tales ‘GRANDMA’ and the experimental ‘THE DYING MAN’, along with the unfinished incarnation tale ‘HOMO AMPHIBIOUS BURLESQUE’ which plays prominently in the feature film ‘HUMAN NO MORE’ (2020).  Spearheading the book is the acclaimed, but rare, demonic serial-killer thriller ‘NOTE-TO-SELF’, previously featured in the “Journals Of Horror” anthology, and now updated with additional material.  Also included is the very rare (as yet unproduced) screenplay for the short film ‘ROSEBLOOD’, based on Broadstone’s controversial Christian horror story of the same name.

Bringing this new collection into perspective and linking Broadstone’s earliest literary works to his most current is ‘HUMAN NO MORE’ producer MATTHEW SANDERSON, who also edited the books ‘SUICIDE THE HARD WAY’ and ‘A CATCH IN TIME’.

If you love Christopher Alan Broadstone’s philosophical and macabre books and films, as well as his lyrics for the jazz/punk/new-wave band ABOUT 9 TIMES and his grunge band THE JUDAS ENGINE, you’ll want to see where it all began…and where it all has come to. 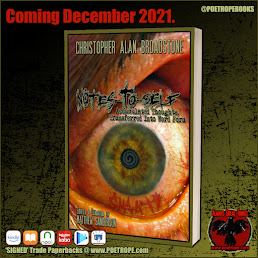 Posted by blackCABproductions at 7:18 AM