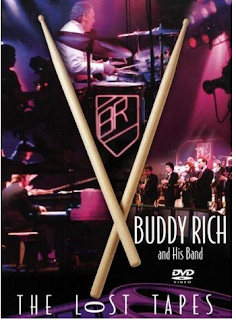 I got in a Buddy Rich (one of my big drumming influences) mood the other day and had to dig out the The Lost "West Side Story" Tapes on DVD.  The video here isn't HD, but the audio is great and one of Buddy's best performances with his band (which could blow off doors).  In this medley from "West Side Story" Buddy (at 67 years old) plays two magnificent solos, the first at about 2:50 (on the clock) and the second at 8:50. The latter solo is the best of the two, so take a listen to that if you don't have time to listen to the entire tune.  Enjoy!

Paraphrased from the DVD liner notes written by Cathy Rich –– Formerly The Lost "West Side Story" Tapes, this magnificent performance from 1985 is the last of Buddy's recorded and filmed works.  This is an Emmy nominated concert once feared lost in a fire, that has been fully restored with a state-of-the-art audio mix.

Buddy's signature piece of music that closed almost every concert on the road, was his "West Side Story" medley.  Always ending with a blazing drum solo finale.  The solo captured on this night was exceptional.  Once again, Buddy at 67 years old shows us all why he is still the benchmark for all to be measured by.


Posted by blackCABproductions at 8:08 AM