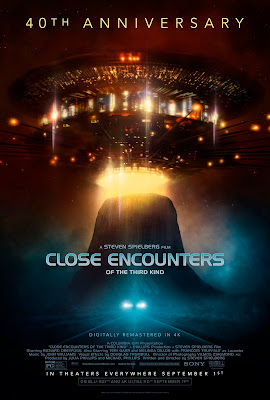 Woohoo! I saw the re-release of CE3K yesterday in the excellent Dolby Theater and really enjoyed it. One of my favorite films––and Spielberg's best, in my opinion––and very influential on me as a writer and filmmaker. The film is an outstanding example of character detail and motivation, performances, dialogue, dark humor, and mise en scène.

CE3K is also a film where the musical score is absolutely integral for the story of the film. That's rare.
Well worth revisiting––and it looked beautiful!––checkout CE3K 40th Anniversary Release while it's on theaters on the big screen.

Posted by blackCABproductions at 10:38 AM