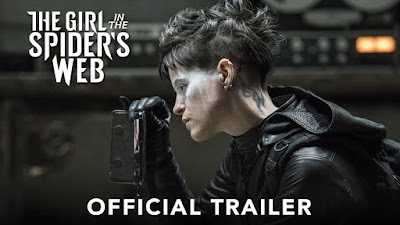 THE GIRL IN THE SPIDER'S WEB (November 2018)
Hmmmmmmm...clearly Sony is hoping to cash in on the recent sexual abuse scandals with this trailer. Granted the DRAGON TATTOO series is about such themes, although much more personalized, IMO. This looks like a general revenge, vendetta, and action film.
It is now also a fact that SONY PICTURES is jumping forward to the 4th book––THE GIRL IN THE SPIDER'S WEB: A Lisbeth Salander novel, continuing Stieg Larsson's Millennium Series––and written by another author, DAVID LAGERCRANTZ.
I loved the Swedish film versions of the first 3 books, and also I'm a big fan of DAVID FINCHER'S American version of THE GIRL WITH DRAGON TATTOO (Daniel Craig and Rooney Mara). Although some found it dull, I found it riveting and excellent filmmaking. Not sure about this new film, however. Too bad FINCHER isn't directing and very bummed that ROONEY MARA isn't returning as LISBETH SALANDER. Hmmmmm...oh well.
Enjoy HE GIRL IN THE SPIDER'S WEB trailer here:
https://youtu.be/XKMSP9OKspQ 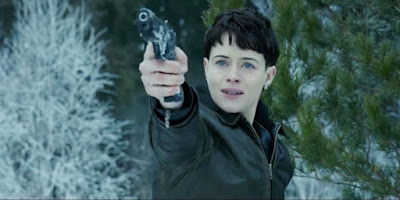 Posted by blackCABproductions at 7:04 AM