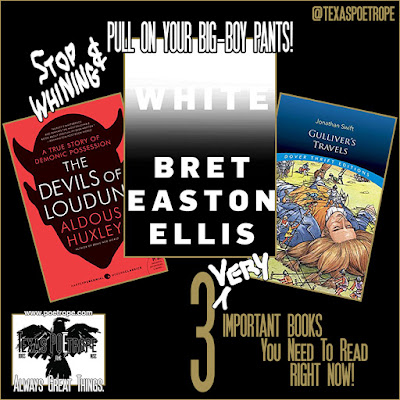 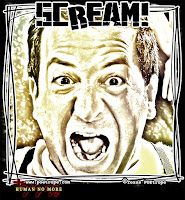 We are in extremely trying and difficult times, which demands that everyone
––even ‘woke’ and ‘victim culture’––
take the reins of their OWN LIVES and get their heads on straight
or there might be no climbing back out of the rabbit hole this world is funneling into.
Thus and therefore, Mr. B. ever so kindly suggests––
“GET SOME WISE-UP’ in your mind!”
and if you must get pissed off––
“DON’T GET PISSY!”

“Left to themselves such devils as remained soon took their leave.
If there had been no exorcists, it would never have begun.”
––‘The Devils Of Loudun’, Aldous Huxley 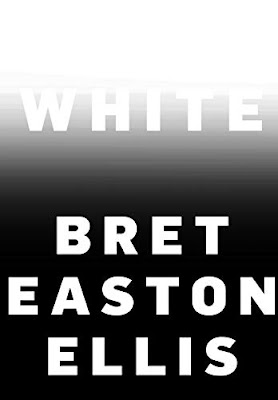 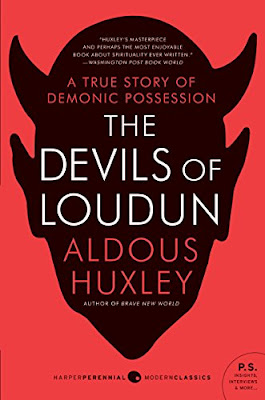 THE DEVIL’S OF LOUDUN
by
ALDOUS HUXLEY 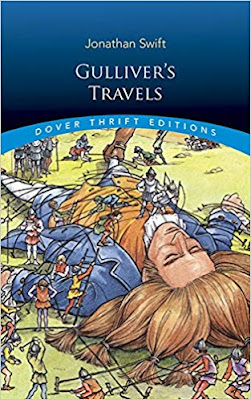 (Or hey, just spend a little time devouring these excellent bits from the books.)


‘WHITE’ by BRET EASTON ELLIS
01_“Here’s the dead end of social media: after you’ve created your own bubble that reflects only what you relate to or what you identify with, after you’ve blocked and unfollowed people whose opinions and worldview you judge and disagree with, after you’ve created your own little utopia based on your cherished values, then a kind of demented narcissism begins to warp this pretty picture. Not being able or willing to put yourself in someone else’s shoes—to view life differently from how you yourself experience it—is the first step toward being not empathic, and this is why so many progressive movements become as rigid and as authoritarian as the institutions they’re resisting.”––Bret Easton Ellis, White

02_“...once you start choosing how people can and cannot express themselves then this opens the door to a very dark room in the corporation from which there's really no escape. Can't they in return police your thoughts, and then your feelings and then your impulses? And, finally, can they police, ultimately, your dream?”––Bret Easton Ellis, White

03_“This forced you to look again at the people who raised them, coddling them with praise and trying to shield them from the grim sides of life, which might well have created children who, as adults, appeared highly confident, competent and positive but at the hint of darkness or negativity often became paralyzed and unable to react except with disbelief and tears—You just victimized me!—and retreated, in effect, into their childhood bubbles.”––Bret Easton Ellis, White

04_“Feelings aren't facts and opinions aren't crimes and aesthetics still count—and the reason I'm a writer is to present an aesthetic, things that are true without always having to be factual or immutable.”––Bret Easton Ellis, White

05_“Everything has been degraded by what the sensory overload and the supposed freedom-of-choice technology has brought to us, and, in short, by the democratization of the arts.”––Bret Easton Ellis, White


‘THE DEVILS OF LOUDUN’ by ALDOUS HUXLEY

02_“Far more dangerous than crimes of passion are the crimes of idealism—the crimes which are instigated, fostered and moralized by hallowed words. Such crimes are planned when the pulse is normal and committed in cold blood and with unwavering perseverance over a long course of years. In the past, the words which dictated the crimes of idealism were predominantly religious; now they are predominantly political.”––Aldous Huxley, The Devils of Loudun  “When crowd-delirium is exploited for the benefit of governments and orthodox churches, the exploiters are always very careful not to allow the intoxication to go too far. The ruling minorities make use of their subjects’ craving for downward self-transcendence in order, first, to amuse and distract them and, second, to get them into a subpersonal state of heightened suggestibility. Religious and political ceremonials are welcomed by the masses as opportunities for getting drunk on herd-poison, and by their rulers as opportunities for planting suggestions in minds which have momentarily ceased to be capable of reason or free will.”––Aldous Huxley, The Devils of Loudun

03_“There is the camera (of which it was once naively said that “it cannot lie”) and its offspring, the movies and television; these three have made the objectification of tendentious phantasy absurdly easy. And finally there is that greatest of our social inventions, free, compulsory education. Everyone now knows how to read and everyone consequently is at the mercy of the propagandists, governmental or commercial, who own the pulp factories, the linotype machines and the rotary presses. Assemble a mob of men and women previously conditioned by a daily reading of newspapers; treat them to amplified band music, bright lights, and the oratory of a demagogue who (as demagogues always are) is simultaneously the exploiter and the victim of herd-intoxication, and in next to no time you can reduce them to a state of almost mindless subhumanity. Never before have so few been in a position to make fools, maniacs or criminals of so many.”––Aldous Huxley, The Devils of Loudun

04_“In Communist Russia, in Fascist Italy, in Nazi Germany, the exploiters of humanity’s fatal taste for herd-poison have followed an identical course. When in revolutionary opposition, they encouraged the mobs under their influence to become destructively violent. Later, when they had come to power, it was only in relation to foreigners and selected scapegoats that they permitted herd-intoxication to run its full course. Having acquired a vested interest in the status quo, they now checked the descent into subhumanity at a point well this side of frenzy. For these neo-conservatives, mass intoxication was chiefly valuable, henceforward, as a means for heightening their subjects’ suggestibility and so rendering them more docile to the expressions of authoritarian will. Being in a crowd is the best known antidote to independent thought. Hence the dictators’ rooted objection to “mere psychology” and a private life. “Intellectuals of the world, unite! You have nothing to lose but your brains.”––Aldous Huxley, The Devils of Loudun

05_“Those who crusade not for God in themselves but against the devil in others, never succeed in leaving the world better, but leave it as it was or sometimes even perceptibly worse than it was before the crusade began.”––Aldous Huxley, The Devils of Loudun

06_“A hell, from which one can be saved by a quibble that would carry no weight with a police magistrate, cannot be taken very seriously.”––Aldous Huxley, The Devils of Loudun

07_“No man can concentrate his attention upon evil, or even upon the idea of evil, and remain unaffected. To be more against the devil than for God is exceedingly dangerous.”––Aldous Huxley, The Devils of Loudun

01_“I replied that England (the dear place of my nativity) was computed to produce three times the quantity of food, more than its inhabitants are able to consume, ... But, in order to feed the luxury and intemperance of the males, and the vanity of the females, we sent away the greatest part of our necessary things to other countries, from whence in return we brought the materials of diseases, folly, and vice, to spend among ourselves. Hence it follows of necessity that vast numbers of our people are compelled to seek their livelihood by begging, robbing, stealing, cheating, pimping, forswearing, flattering, suborning, forging, gaming, lying, fawning, hectoring, voting, scribbling, freethinking,”––Jonathan Swift, Gulliver's Travels


02_“He was perfectly astonished with the historical account gave him of our affairs during the last century; protesting “it was only a heap of conspiracies, rebellions, murders, massacres, revolutions, banishments, the very worst effects that avarice, faction, hypocrisy, perfidiousness, cruelty, rage, madness, hatred, envy, lust, malice, and ambition, could produce.”

...His majesty, in another audience, was at the pains to recapitulate the sum of all I had spoken; compared the questions he made with the answers I had given; then taking me into his hands, and stroking me gently, delivered himself in these words, which I shall never forget, nor the manner he spoke them in: “My little friend Grildrig, you have made a most admirable panegyric upon your country; you have clearly proved, that ignorance, idleness, and vice, are the proper ingredients for qualifying a legislator; that laws are best explained, interpreted, and applied, by those whose interest and abilities lie in perverting, confounding, and eluding them. I observe among you some lines of an institution, which, in its original, might have been tolerable, but these half erased, and the rest wholly blurred and blotted by corruptions. It does not appear, from all you have said, how any one perfection is required toward the procurement of any one station among you; much less, that men are ennobled on account of their virtue; that priests are advanced for their piety or learning; soldiers, for their conduct or valour; judges, for their integrity; senators, for the love of their country; or counsellors for their wisdom. As for yourself,” continued the king, “who have spent the greatest part of your life in travelling, I am well disposed to hope you may hitherto have escaped many vices of your country. But by what I have gathered from your own relation, and the answers I have with much pains wrung and extorted from you, I cannot but conclude the bulk of your natives to be the most pernicious race of little odious vermin that nature ever suffered to crawl upon the surface of the earth.”––Jonathan Swift, Gulliver's Travels 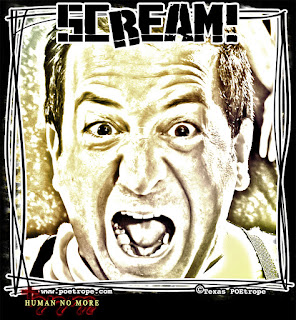 MR. B. (The Mirror Murders Killer) OFFERS
SOME FINAL WORDS OF WISDOM FOR THE NEW ROARING TWENTIES...

01_”Always remember that your precious poo-hole stinks just like everyone else’s.”

02_”All perfect snowflakes melt at just one degree above freezing, and that is a
very, very, very narrow margin to never ever cross in a real and functioning world.”

03_”Life is a bitch and then YOU get recycled, no matter how teeny-tiny
itty-bitty your carbon footprint is.”

04_”Wake up, smile up, and wiggle your toes in the sand while you can.
In the grand scheme of things you are just not that special.
And always ask yourself: What the hell are you trying to save
everyone and everything for anyway?”


HAVE A NICE DAY!

And GRAB A MR. B. Tee
To Support The New Feature Film
HUMAN NO MORE(Coming 2020) 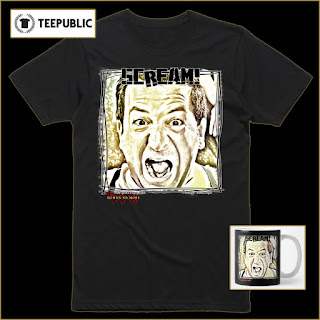 Posted by blackCABproductions at 5:35 AM