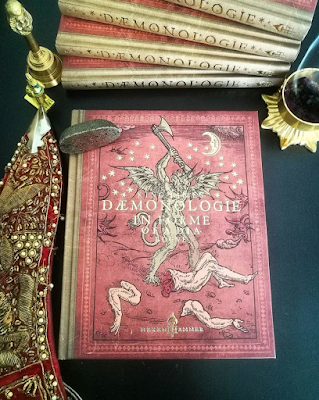 “DAEMONOLOGIE”
by
King James
(Originally Published 1597)
.
Hexenhammer Books
(Berlin, Germany)
Hexenhammer is new publisher of rare limited edition books.
.
Available On ETSY.com
(While Supplies Last)
www.etsy.com/shop/HexenhammerBooks
.
Also Contact Hexenhammer on Instagram
–– For Any Special Pricing ––
www.instagram.com/hexenhammerverlag/
.
.
I am totally loving this beautiful limited edition book (the first from Berlin publisher Hexenhammer)!  Reading "Daemonologie" is challenging, being presented in the original Old English, but is a fascinating trip back into a very different time in history.  A time when witches were real and demons of all kinds lurked in every shadow, as well as in plain sight––Necromancers and Sorcerers––looking just like the butcher, the baker, and the candlestick maker.  And your trusted neighbor, too.  And this is what made the 1597 world of "Daemonologie" an extremely dangerous place.  It didn't take much to be accused of consorting with the Devil (Deuill/Deuilles: in Old English)––a witch!  Or worse.  You just might find yourself in the local torture chamber, or brought before the King to confess.  "Daemonologie" is an excellent springboard for taking a dive into a much deeper and darker period in human history.  Read more about this grim history below the pics of my personal copy of "Daemonology" (Limited Edition 11 of 500 printed).  Enjoy!
.
.
"Click" Pics To Enlarge
. 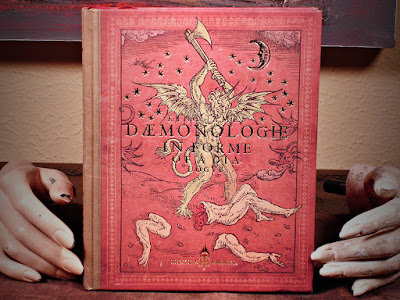 .
Hexenhammer proudly presents: “Daemonologie” by King James (originally published 1597). The book is hand-numbered limited edition of 500 copies. It is bound hardcover with gold hightlights on cover, spine and back cover. The paper, colors and materials are the best quality in the market. Book contains page marker ribbon. Text is written in old english and book includes fine quality illustrations. 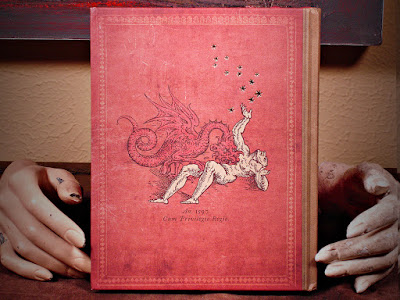 .
Book tells about witches, demons, necromancers, werewolves and magic practice of that time. It gives an interesting historical insight how nobles, intellectuals and people of that time saw these evil, but interesting forces. Book is written in form of a dialogue. Two philosophers are discussing about the subject: should they believe that these forces are real and eventually: how should they deal with them? 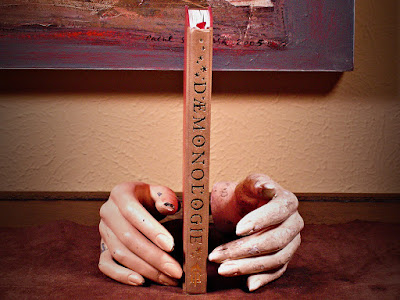 .
This book is a rare treasure for every book collector and to everyone who is interested in occult subjects and curiosities like witchcraft, magic and demonology. 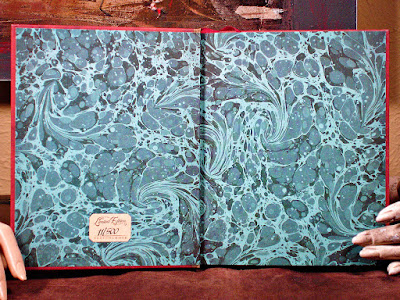 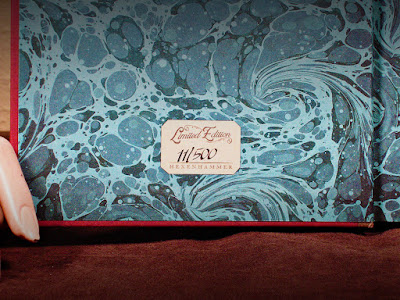 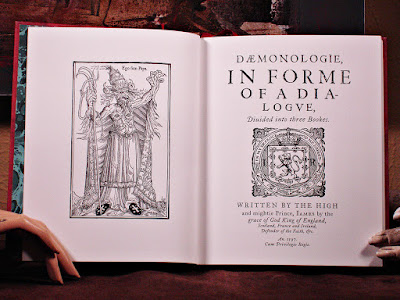 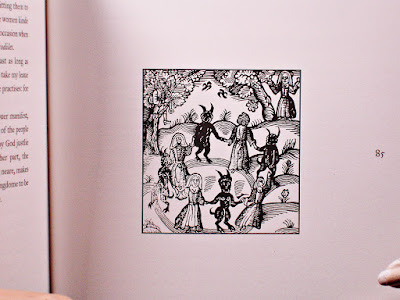 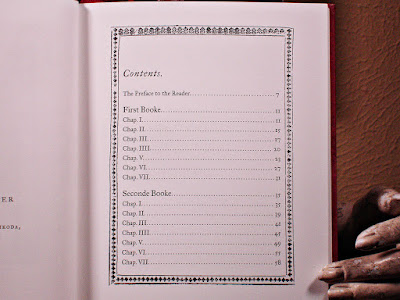 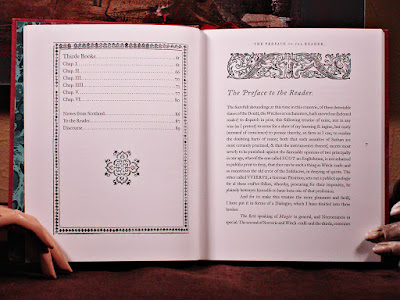 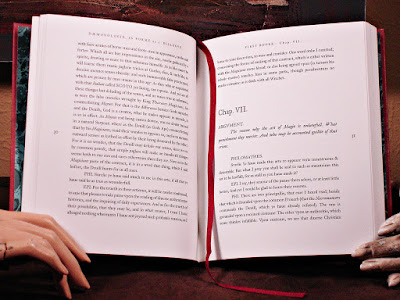 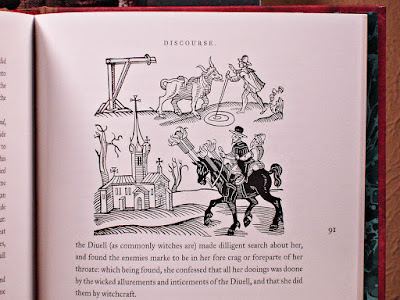 .
.
.
More About King James’ “DAEMONOLOGIE”
.
.
Daemonologie—in full “Daemonologie, In Forme of a Dialogue, Divided into three Books”: By the High and Mighty Prince, James &c.—was written and published in 1597[1] by King James VI of Scotland (later also James I of England) as a philosophical dissertation on contemporary necromancy and the historical relationships between the various methods of divination used from ancient black magic.
.
This included a study on demonology and the methods demons used to bother troubled men. It also touches on topics such as werewolves and vampires. It was a political yet theological statement to educate a misinformed populace on the history, practices and implications of sorcery and the reasons for persecuting a person in a Christian society accused of being a witch under the rule of canonical law.
.
This book is believed to be one of the main sources used by William Shakespeare in the production of “Macbeth”. Shakespeare attributed many quotes and rituals found within the book directly to the Weird Sisters, yet also attributed the Scottish themes and settings referenced from the trials in which King James was involved.
.
Read Even More Here: en.wikipedia.org/wiki/Daemonologie


.
.
.
Inspiration For King James' “Daemonology”
.
Dr. John Fian (alias Cunninghame) (died 27 January 1591) was a Scottish schoolmaster in Prestonpans, East Lothian and purported sorcerer. He confessed to have a compact with the devil while acting as register and scholar to several witches in North Berwick Kirk. He was accused of bewitching townsfolk, preaching witchcraft, and, along with Agnes Sampson and others, raising storms to sink the fleet of King James VI of Scotland and his wife Anne of Denmark as they returned from their wedding celebrations in Oslo. He along with several other witches were arrested, examined and put to torture, in what would become known as the North Berwick witch trials.

Newes from Scotland - declaring the damnable life and death of Dr. Fian, a notable sorcerer is a pamphlet printed in London in 1591, and likely written by James Carmichael, who later advised King James VI on the writing of his book “Daemonologie”. It describes the infamous North Berwick witch trials in Scotland and the confessions given before the King. It was subsequently published in “Daemonologie” by King James in 1597.  . The initial and subsequent publications of “Daemonologie” included a previously published news pamphlet detailing the accounts of the North Berwick witch trials that involved King James himself as he acted as judge over the proceedings. The deputy bailiff to the kingdom of Scotland, David Seaton, had a servant named Geillis Duncan who, within a short period of time, was found to have miraculously helped any who were troubled or grieved with sickness or infirmity.

David Seaton examined her as a witch and obtained a confession that caused the apprehension of several others later declared to be notorious witches. Agnis Tompson confessed before King James to have attempted his assassination using witchcraft on more than one occasion. The pamphlet details how she attempted these. She also participated in a sabbat during All Hallows' Eve as her and others sacrificed a cat and sent it into the sea as they chanted in hopes of summoning a tempest to sink a fleet of ships accompanying James as he was arriving in the port of Leith from a trip to Norway. One ship was sunk from the storm containing gifts meant for the Queen of Scotland but the others including the ship transporting King James were unharmed. . Doctor Fian was deemed a notable sorcerer and was among many others that were apprehended in the trials. The pamphlet details their reasons for conducting sorcery, the methods used, how each of the witches were apprehended and the torture methods used in their punishments and death. The case of Doctor Fian follows his compact with Satan, a conflict he had with another witch who sabotaged an enchantment meant for her daughter, his examinations during the trial, the torture he endured, his escape and subsequent execution.

.
Learn Even More About
The NORTH BERWICK WITCH TRIALS
en.wikipedia.org/wiki/North_Berwick_witch_trials
.
. 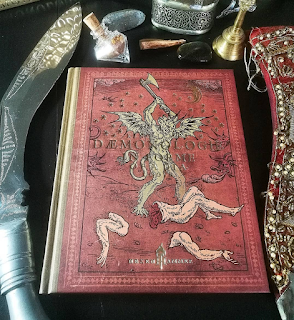 Posted by blackCABproductions at 12:12 PM