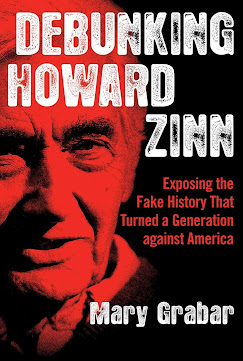 Debunking Howard Zinn:
Exposing the Fake History That Turned a Generation Against America

Howard Zinn’s "A People’s History of the United States" has sold more than 2.5 million copies. It is pushed by Hollywood celebrities, defended by university professors who know better, and assigned in high school and college classrooms to teach students that American history is nothing more than a litany of oppression, slavery, and exploitation.

Zinn’s history is popular, but it is also massively wrong.

Grabar also reveals Zinn’s bag of dishonest rhetorical tricks: his slavish reliance on partisan history, explicit rejection of historical balance, and selective quotation of sources to make them say the exact opposite of what their authors intended. If you care about America’s past—and our future—you need this book.

Wilfred McClay, the G.T. and Libby Blankenship Chair in the History of Liberty at the University of Oklahoma, calls Mary Grabar’s Debunking Howard Zinn (Regnery, 2019) “a book for which every American should be grateful.”  In “A Radical Pseudo-Historian Meets His Match,” McClay begins by acknowledging “the singular success” of a polemic, passing as historical scholarship, written by a radical left-wing activist who was not a professional historian at all.  Zinn’s "A People’s History of the United States" continues to exert an enormous influence over the educational establishment at multiple levels. Professional historians, McClay observes, remained largely silent in criticizing Zinn’s text. He mentions that Eugene D. Genovese (1930-2012), a charter member of The Alexander Hamilton Institute’s board of academic advisers, proved to be one of the notable exceptions.

"Appalled by the rampant corruption of the liberal arts ethos by Marxists and other left-wing extremists on many college campuses, I began monitoring education news sites and going “undercover” to teacher conferences. I wrote reports and articles, spoke at conferences and to tea-party groups, and did radio interviews—and lost teaching jobs. I was down to teaching at one school, Emory, and had the idea of starting Dissident Prof  in order to better inform the public. Then I found myself in the web of President Obama’s IRS, fighting the government’s stonewalling for nearly two years in providing my organization with non-profit status."
Read The Rest Here:
www.theahi.org/ahis-mary-grabar-why-i-wrote-debunking-howard-zinn/

Posted by blackCABproductions at 7:21 AM