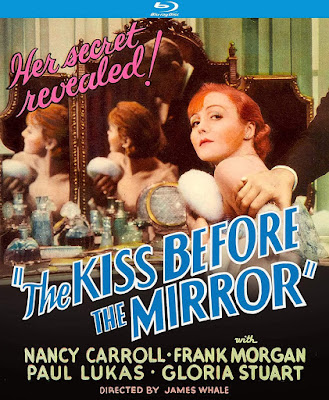 Excellent film with an amazing restoration,
but terrible commentary from a gender-obsessed hack critic.


MY AMAZON VIEWER REVIEW:
(This ought to piss off a few worthless whiny snowflakes.)

Another great film by a truly talented and original film director James Whale.  Excellent cinematography by Karl Freund, who was very much a pioneer of camera movement and ahead of his time.  I was hoping to hear quite a bit about Freund and Whale, in regard to technical, piquant, and demonstrative filmmaking, in the commentary.  Unfortunately, the audio essay by Alexandra Heller-Nicholas (a gender politics obsessed film critic) is about little more than convincing the viewer that women are victims of men due to being objectified.
.
What Heller-Nicholas fails to mention is that the only characters truly in power in this film are the three main female characters, Jean Dixon (as Hilda the law assistant) who has little interest in men and is generally all-business, and therefore is in control throughout; at least of her emotions and perspective.  The second is lead Nancy Carroll (as Maria Held), who––like so many women––knows how to use her sexuality to literally run men around in circles and turn them into killer lunatics.  Or, in the case of Paul Lukas (as Walter Bernsdorf, the man on trial)––well, his sexually controlling wife (played by Gloria Stuart) had him literally shooting and then sobbing like a baby in short order.
.
The men in this film are single minded and generally pathetic victims of their libido and their love of the female form (nowadays, of course, this is a crime).  It’s the women in “The Kiss Before The Mirror” who possess all the power, having lured and captured their men, enjoyed their husbands’ wealth and status, and perpetrated extramarital affairs to boot.  And the latter because they were most likely bored by their husbands, according to critic Heller-Nicholas; which, I guess, means I’m to assume is good enough reason to screw around and potentially wreck a marriage and, very possibly, their lives and the lives of their husbands.
.
As a serious writer and filmmaker myself, I don’t mind some character psychology in film commentaries, but when there is nothing but one-note psychology, well I’ll pass.  Also, in Heller-Nicholas’ fawning over the women in the film, she didn’t even mention a great bit part by character actor Michael Mark, famous for many uncredited roles, such as the father of the drowned girl in Whale’s Frankenstein 1931.  You’d think Mark’s connection to Whale’s most famous film would be enough to merit a mention.  But no.  And Heller-Nicholas even had two chances to do so.
.
Thanks to Kino caving to the ‘woke’ mob, I learned absolutely nothing of value from Alexandra Heller-Nicholas’ commentary.  Except that Jean Dixon (as Hilda the law assistant) might be a lesbian character.  Hmmmm…okay, right…I learned nothing; certainly nothing that wasn’t obvious.  My advice is buy and watch “The Kiss Before The Mirror” because it is an excellent film, well acted by all, and directed by one of the genuinely great filmmakers James Whale.  And be sure to enjoy the wonderful camera work and lighting by cinematographer Karl Freund.  But don’t bother with the ‘woke’ fluff-piece audio commentary.  Since I’m not a racist (don’t care what color you are), not homophobic or LGBTQ (couldn’t care less what your sexual preference is), and I’m not a lip-service L-monkey, I’ll say what most of you are thinking by now.  Yes, I wrote all this because Heller-Nicholas audio essay would have been better left in a high school thesis paper for her gender politics class.  James Whale might have been homosexual, but he probably would have thrown up listening to this film commentary.  Or, more true to Whale’s character, he probably would have just had a good laugh.

Posted by blackCABproductions at 9:41 AM