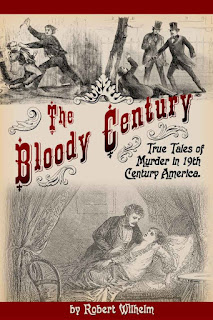 Sadly buried somewhere in a box long before I've finished reading, THE BLOODY CENTURY is a very interesting book organized as single cases of murder in the 19th Century. Check it out.
On Amazon:
https://www.amazon.com/Bloody-Century-Tales-Murder-America-ebook/dp/B00Q1KHA6U/ref=sr_1_9?s=books&ie=UTF8&

"A murderous atmosphere pervaded nineteenth century America unlike anything seen before or since. Lurid murder stories dominated newspaper headlines, and as if responding to the need for sensational copy, Americans everywhere began to see murder as a solution to their problems. The Bloody Century retells their stories; some still famous, some long buried, all endlessly fascinating.

"The Bloody Century is a collection of true stories of ordinary Americans, driven by desperation, greed, jealousy or an irrational bloodlust, to take the life of someone around them. The book includes facts, motives, circumstances and outcomes, narrating fifty of the most intriguing murder cases of nineteenth century America. Richly illustrated with scenes and portraits originally published at the time of the murders, and including songs and poems written to commemorate the crimes, The Bloody Century invokes a fitting atmosphere for Victorian homicide.

"The days of America’s distant past, the time of gaslights and horse drawn carriages, are often viewed as quaint and sentimental, but a closer look reveals passions, fears, and motives that are timeless and universal, and a population inured to violence, capable of monstrous acts. A visit to The Bloody Century may well give us insight into our own."
Posted by blackCABproductions at 9:40 AM