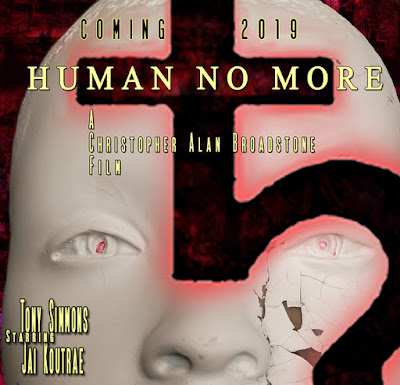 MOVIE UPDATE–– HUMAN NO MORE (The Feature Film)––Starring TONY SIMMONS and JAI KOUTRAE!
Production dates have been scheduled and confirmed by all key players on this new crime against nature and humanity known as the feature film HUMAN NO MORE.

We will begin the primary shoot October 18th at TEXAS POE-ETROPE STUDIOS.
Also...I've had some wonderful Skype video meetings with actor JAI KOUTRAE, who is going deeper and deeper into the how, the why, and the way of the Mirror Murders Killer. And, to generally quote, Mr. Koutrae when I confronted him with a "what the hell are we really doing here?", JAI confirmed he's the right actor for the role (and for me the writer/director) by saying: I feel this movie will have a strong audience. Some people will love it, but it's really going to piss off some others. Isn't that what we want?
Yes, JAI, that is what we want. To slap a few folks into wake-up mode. But in a very dark art and philosophical sort of way. lol.
PICTURE Below:
Random shot of MY LITTLE WORLD work station where all the magic happens. lol I was actually conducting a primary test (successful!) for splitting an audio signal (from my Sennheiser shotgun/boom mic) into stereo lines into direct box to my camera for dual level recording of audio when in production on the upcoming October shoot of HUMAN NO MORE.

Still endless issues to solve and resolve before the set build begins in mid August. 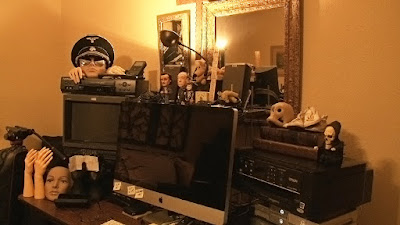 Find out much more about HUMAN NO MORE here:
http://blackcabproductions.com/Movies_HNM-Feature_Movie-Page.html
Posted by blackCABproductions at 6:51 PM