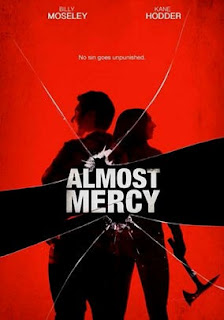 I finally broke down and watched ALMOST MERCY last night and looooved it!
Directed by Tom DeNucci, ALMOST MERCY is a great, "very" indie flick about teen angst turned-down dark, introspective, funny, and bloody, in a small town as twisted behind closed doors as the worst of them. Very well written, shot, and acted –– especially by up and coming actress Danielle Guldin. She is my new movie-girl bloody-baby-doll crush! Yeah, she floats my boat –– must be that aquiline nose mixed with her alt-girl in dark T-and-jeans, I-really-do-care but-everything-can-burn-anyway vibe. ALMOST MERCY isn't thematically brand new, but it's done with a beautifully hip, depressed style and perverse vigor –– the latter spiced with the performances of horror staples, actors Bill Moseley and Kane Hodder. ALMOST MERCY might sound like it drags you down into the deep and dirty trenches of middle American morbidity –– and it does –– but I think you'll find yourself having too much fun by the time the credits roll. Currently streaming on Netflix.
Check out the trailer, which makes the film seem like a vampire flick –– trust me, it isn't. Nonetheless, the main characters are struggling with the psychological vampirism that many kids are too often subjected to by less than adequate parents/adults.
https://www.youtube.com/watch?v=owLgpFo9ZVs

Posted by blackCABproductions at 9:34 AM