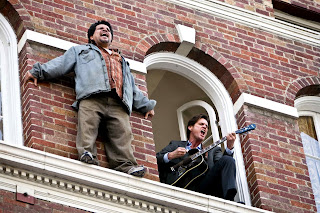 The film YES MAN is one of my all time fav comedies and one of my fav Jim Carrey movies.  It not only focuses on and exploits his crazy antics, but transcends them with great wit and heartfelt insight into life.  I've thought more than once, I am his character in this film.  Afraid of too much, too scarred to say yes to too many things (although I've risked much).  Too much built up fear and anger.  Which brings me to the point of my introspective (some might consider very negative) week.  As I previously mentioned with the film MR. HOLMES, some folks go see shrinks, but I go see movies.  This is why.

Regarding art –– dreams –– Zooey Deschanel's character in the film, says:

"I know our music isn't that mainstream; I love doing it.  It's like my photography; I know there isn't that much demand for blurry photographs taken while running, but –– ya know, who cares? The world is a playground.  You know that when you're a kid.  But somewhere along the way everyone forgets it."

And the older I've gotten, it's also been harder and harder for me to remember that.

But the only time I feel ok in this world is when I'm deep in a project and I'm working (12, 14, sometimes 16 hour days).  It's then that everything goes away.  The real life horrors, so I can focus on the surreal ones.  It's only then, when I'm lost in the creative work I am happy.  It's just that my increasing fear is...well...that will have to go away, because the real world will demand it.  It get's harder and harder to step back from that ledge.  Enjoy the clip.  I have to remember it's ok to commit a little SUICIDE.