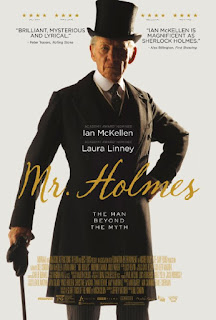 Saw MR. HOLMES this morning, partly because I was wanting to see it, but mostly because I was in dire need to watch a film in the theater with popcorn and a Coke-0. Some folks go see a shrink, I go to the movies when feeling at odds with myself and/or the world. That being said, Sherlock Holmes in this film is also questioning his life and his failings and wondering not only where he went so wrong, but how can he come to be at peace with his errors and with himself. This was the perfect film for me today and I really liked it. Ian McKellen was outstanding as always. Very much a 93 year old Holmes, stern and deductive, but also very human and still learning compassion –– which has, in all truth, overcome his expected deductive, cool demeanor. I thought it was a lovely touch that when he goes to see a Hollywood style Sherlock Holmes film, the actor playing Holmes is none other than Nicholas Rowe, who portrayed the same character in another of my fav films YOUNG SHERLOCK HOLMES. The film is pleasant and intriguing, if not an edge-of-your-seat whodunnit. Worth checking out.