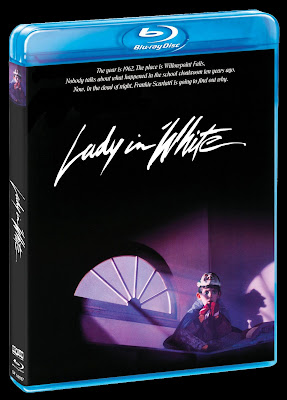 Frank LaLoggia's ghostly coming-of-age classic "Lady In White" is finally available on Blu-ray and will certainly look lovely in high definition.  The warm color-correction and Autumn, Halloween, and wintry set pieces should defrost the eyes and soul of the kid in all of us.  Watching the film is like snuggling up in a toasty chair by the fire and reminiscing about a beautiful, yet terrifying, nightmare you had when you were younger.  One that kept coming back again and again, night after night, and in adulthood has never quite been lost to time.  Not unlike the "Lady In White" in the film itself.

The movie was made in a pre-CGI world, and the practical and optical effects are now surreal and wonderful to watch––floating bodies, hovering ghosts, and apparitional, unsolved child murders.  And this is where "Lady In White" brings the young Frankie Scarlatti (played by an adolescent Lucas Haas) into adulthood.  These killings also bring the viewer into adulthood, making all of us voyeurs as guilty as any of the Willowpoint Falls townsfolk.  The focus of this particular tale is on one murdered girl and the ever haunting "Lady In White" that have overshadowed Willowpoint Falls for a decade.  Frankie inadvertently discovers the ghosts, is haunted by them, and is compelled to follow them––even begged to follow them––on their nightly journeys in efforts to reveal the secret, and motivations behind their untimely deaths.  They want the real killer exposed at last.  And Frankie does too; yet not only to bring the truth into the light, but because he has changed inside, which is stated poignantly in the film, when he says to himself one Christmas morning: "As for me, I'd grown up just a little bit more than I was supposed to, I think.  Responsibility had become my constant companion.  And I was no longer afraid of what I could not see."  Soon enough his newfound maturity will bring him face-to-face with a much greater horror than any ghosts he's previously encountered––a horror all too close to home.

For myself, "Lady In White" makes me think of some earlier films, like "The Goonies"––for it's autumnal, northern coastal American vibe––and films that invoke elements of paranormal fantasy, like Disney's "Escape To Witch Mountain".  Although "Lady In White" is not an adventure film, it is nonetheless adventurous for young Frankie Scarlatti.  To current generation viewers, "Lady In White" will remind them of a much newer horror film, "Mama", produced by Guillermo del Toro.  "Mama" is more of an edgy terror with jump scares, but it clearly borrows from the the film "Lady In White" in story and theme––"A mother's love is forever."––as well as the fantastical ending of the ghostly, miserably lost "Mama" craving for the return of her child.

The film score for "Lady In White" is also composed by director Frank LaLoggia and is quite lovely.  Pay attention to the music when viewing the film and seek it out on CD.

Overall, "Lady In White" is a wonderful diversion for a cold, stormy night and an armchair trip down memory lane.  If you are looking for a movie that is brimming with old-school special effects, nostalgic set pieces, and the peculiar warmth that "growing up" can bring back to us now that we are adults ourselves, check out "Lady In White". 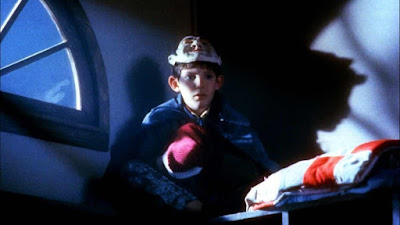 Posted by blackCABproductions at 1:20 PM