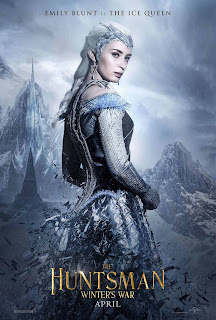 Woohoo! The prequel to one of my fav guilty pleasures movies––SNOW WHITE AND THE HUNTSMAN––opens a week from this Friday, on April 22nd! Really hoping THE HUNTSMAN: WINTER'S WAR will be as good. At least it has one of my newest movie crush-girls (from SCICARIO), the yummy-licious EMILY BLUNT, playing the Ice Queen. 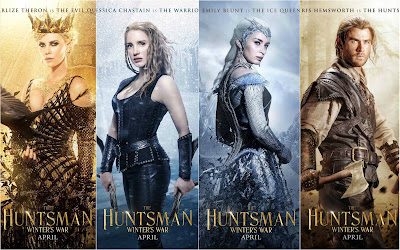 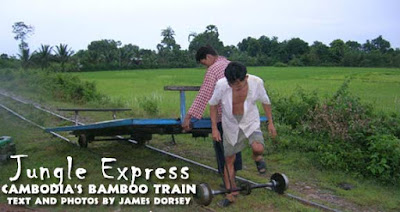 How about traveling on rails in the Cambodian jungle, with trains that travel in both directions?  And when one train meets an oncoming train, the one with the least riders has to take the train apart and off the tracks so the the other can pass, and then reassemble for further travel!

According to GoWorldTravel.com:
"Deep in the Cambodian jungle I was rewarded with the kind of experience only those who wander far afield can find. Locals call it the Norry Train, but to everyone else it is the Bamboo Train, and it is great and simple fun.

"During the second half of the 19th century, Cambodia was a part of French Indochina and the French colonists dotted its rainforests with plantations. They grew coffee and banana, among other things, and needed a way to transport this produce from jungle to market. So they built a small-gauge railroad complete with miniature steam engine specifically for this task.

"Judging by the size of the tracks, I figure the train must have been akin to today’s amusement-park rides, but in its day it got the job done.

"The little train chugged along for half a century until the self-proclaimed communist organization Khmer Rouge came to power in 1975. In their attempt to create an agrarian society, anyone with an education or anything that provided information or even transportation was the enemy.

"This included the little jungle train. They destroyed the engine, but left the rails intact, thinking them worthless without the train itself. Years went by and the jungle claimed the tracks for its own.

"Today, nearly three decades after the fall of the Khmer Rouge in 1979, Cambodia is desperately poor and in need of any and all modes of transport. Most of its roads are dirt. The local jungle people always knew of the train tracks, and gradually began to clear the undergrowth and land mines that had saturated the area.

"The tracks run for about 200 miles (320 km) through the heart of the country, and make a perfect little highway for those smart enough to make it operational. I learned about the train from a guide I hired in Phnom Penh. He had only ridden it once before, since doing so is considered a luxury among many of the local poor.

"There are no actual stations or stopping points, but rather, a series of gathering points that the jungle people use; places where they come together to socialize and barter goods. This is also where they board the train..."

Read the rest of this interesting article here:
http://www.goworldtravel.com/travel-jungle-express-cambodia-bamboo-train/


Enjoy Some Video Of The Bamboo Express In Action! 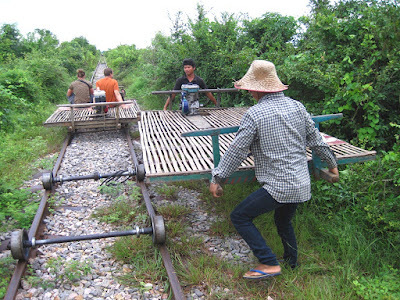 Posted by blackCABproductions at 10:54 AM