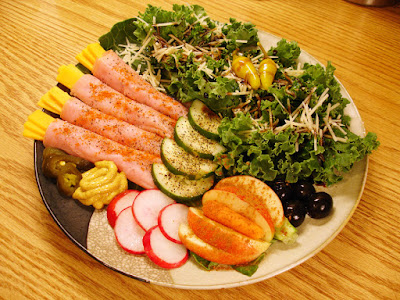 I sensationally call this one ASSASSIN'S FINGER SALAD. I call it that because I had a vision of the dish as I was watching the Sylvester Stallone/Antonio Banderas film ASSASSINS with my parents last night.  Great film written by the Wachowski brothers (although one has now apparently become a sister.  Hmmmm...ok.) of MATRIX trilogy fame.  Great popcorn, action flick if you haven't seen it.

WHAT YOU SEE: Crisp, torn kale sprinkled with parmesan cheese and dressed with canola oil & balsamic vinegar, then topped with two pepperoncinis.  Springing from this are slices of cucumber (drizzled with 50/50 salt & black pepper), radish slices, jalapenos, apple wedges (drizzled with cinnamon), a baby carrot, black olives, and a large dollop of spicy brown mustard for dipping.  Now for the ASSASSIN'S FINGERS: spears of extra-sharp cheddar rolled in extra-lean smoked ham, then sprinkled with black & cayenne pepper.

WHAT YOU DON'T SEE: Lying beneath it all is a giant half-leaf of collard green, which has been marinating in the canola oil & balsamic vinegar.  The stalk is so thick you can pick up the collard green at each end and eat the leaf like an ear of corn.  Delicious!
Posted by blackCABproductions at 2:17 PM