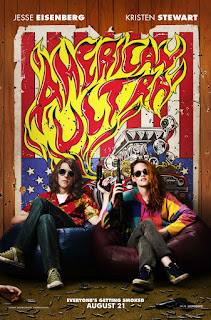 Saw AMERICAN ULTRA this morning and really enjoyed it!

The critics have been panning it with mixed reviews, saying the film doesn't know if it's a comedy, romance, or action movie.  From my perspective it's all of the above.  And why not?  The core of the story is a romantic one, which most critics seem to find agreeable, and I found quite charming and amusing in a pleasantly dark sort of way; it's also stitched seamlessly into the narrative tapestry as events unfold, which can be difficult to do.  As for the direct humor of the film, it isn't always so direct, exploiting a very dry wit (bordering on the serious) that I found laugh-out-loud funny at times –– although it seems I was the only one in the theater getting the comedy of things spiraling out of control, punctuated with a clever-cute piece of verbal understatement.  Now for the action and violence: I found it wonderfully farcical, but dressed up with ferocity, no-nonsense brutality, and bloody fervor.  How could I not love that?

Stars Jesse Eisenberg and Kristen Stewart (another of my movie-girl bloody-baby-doll crushes) are wonderful together, riding a steady undercurrent of authenticity and a wave of subdued passion.  One of the best moments in the film is when Eisenberg finally gets up the nerve to ask Stewart to marry him.

Check this one out.  I found it to be a very entertaining film and consistent in it's blend of dry wit, unsentimental romanticism, and let's-get-bloody-because-we-have-to bravado.

Posted by blackCABproductions at 3:38 PM