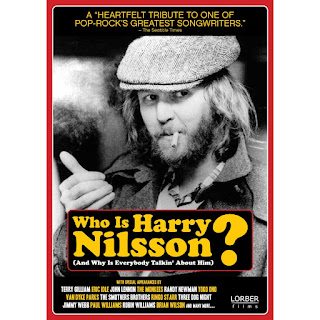 Watched a great documentary the other night, WHO IS HARRY NILSSON (And Why Is Everybody Talkin' About Him?).  Currently streaming on Netflix.

I never really knew who Harry Nilsson was by name, but I certainly know his music.  He sang the very famous song from the film MIDNIGHT COWBOY, "Everybody's Talkin'" (1969), and wrote the major hits "Without You" (1971), "Coconut" (1972), as well as the mega-hit "One" made famous by the rock band Three Dog Night.

He lived life in the fast lane with drink and drugs, although he never toured and performed live; he was best friends with the Beatles, who claimed to be his biggest fans.  In fact it was said that if there were to be a 5th Beatle it would be Harry Nilsson.

If you love music, please check out this documentary on this fascinating, musical genius with the amazing and singular voice.

Posted by blackCABproductions at 11:56 AM