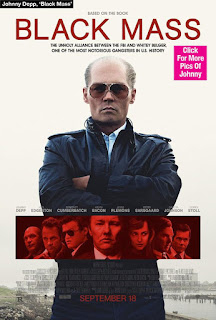 Saw BLACK MASS this morning and really sunk into it!

For what is essentially a biopic of notorious Boston 70s/80s gangster James "Whitey" Bulger (who was finally captured in 2011 here in good ol' Lala Land: Santa Monica –– it figures 3:) ) the film does not play out like most mediocre, let's-see-how-many-facts-we-can-gloss-over, plus compress important real-life-players into a single character, tepid-overall waste of time. The film is dark and very intriguing from word "go" and rolls from beginning to end as a top-notch crime drama worthy of David Fincher or Michael Mann's best work. It also offers some fine bloody violence, which we've all come to love from our modern mobster movies.

The cast, as a whole, was outstanding: Benedict Cumberbatch, Joel Edgerton, Kevin Bacon, Jesse Plemins, Adam Scott, Corey Stoll, Dakota Johnson –– among others –– and Johnny Depp (playing "Whitey" Bulger himself) was great! Finally a film where Depp does some real acting again, instead of being a parody of himself in earlier films. In fact, I kept forgetting it actually was Johnny Depp.

I highly recommend this one to all those who love true crime based movies. Check out the trailer! 3:) Johnny Depp is not nice to play with. lol

Posted by blackCABproductions at 4:33 PM