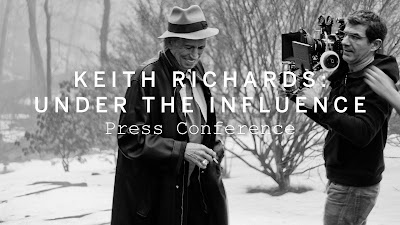 A MUST WATCH on NETFLIX!


KEITH RICHARDS: UNDER THE INFLUENCE (An Original Netflix Documentary)


I've never really cared about the ROLLING STONES one way or another, but I recently watched this new documentary about Keith Richards in his current, later years and loooooved it!  He expounds whimsically and wisely on his past and talks in depth about his passion for music.  It becomes obvious that he's always cared less about being a rockstar and rock-legend than about simply listening to and studying great music and –– more important than anything –– just playing it.


I also really enjoyed how down to earth and personable Mr. Richard's seemed to be.  He's a guy I'd love to hang out with on a lazy Sunday afternoon.  And maybe pick up my old drumsticks and play a groovy shuffle with him.


Whether you like the ROLLING STONES or not, this is a wonderful documentary.  And just listening to Keith twang out a simple riff on an old guitar is truly magical. It's also just plain fun.  I think he'd tell you, now that's the really important part.