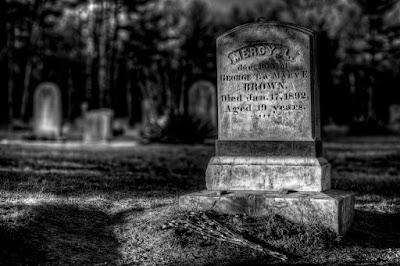 ENOUGH TO MAKE YOU VOMIT and DIE ANYWAY!

MERCY BROWN is one of the most documented and legendary cases of the New England vampire panic of he 1800s.  Yup, America had vampires too, not just Transylvania.  The panic was ignited by an outbreak of tuberculosis, which was called "Consumption" because the disease was believed to be the result of the deceased consuming the life of their surviving relatives.  Hence, Consumption!

The Mercy Brown vampire incident, which occurred in 1892, is one of the best documented cases of the exhumation of a corpse in order to perform rituals to banish an undead manifestation. The incident was part of the wider New England vampire panic.
Several cases of consumption (tuberculosis) occurred in the family of George and Mary Brown, in Exeter, Rhode Island. Friends and neighbors believed that this was due to the influence of the undead. Two family members' bodies were dug up, and, exhibiting the expected level of decomposition, were thought not to be the cause. Daughter Mercy, however, who was held in a freezer-like, above-ground vault, exhibited almost no decomposition. This was taken as confirmation that the undead were influencing the family to be sick. Mercy's heart was burned, mixed with water and given to her brother Edwin, who was sick, to drink, in order to stop the influence of the undead. The young man died two months later.

Uhgggggg...drinking a tea made from my own dead relative's ashes would be enough to make me vomit and die anyway.

Posted by blackCABproductions at 1:49 PM