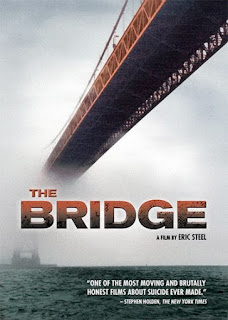 Now, I'll say up front that this doc WON'T be for everyone.  I, on the other hand –– having long been obsessed by a morbid curiosity with death –– ran right out to see the film when it was released in theaters in 2006.  And I have to say, that although truly fascinating, it was also very unsettling to watch at times.  This is why...

Over the span of a year, cameras capture tormented souls trying to kill themselves by leaping from San Francisco's Golden Gate Bridge, underscoring the landmark's rep as the world's most popular suicide destination.

That's right, as the viewer you are getting a front row seat, studying people on the Golden Gate Bridge who may or may not be intending to jump.  You have very detailed accounts from those who have been witness to jumpers; and all of the information given throughout the course of the film is fascinating.  It truly is like watching a train wreck about to happen...about to happen...and then actually happening right before your eyes.

I highly recommend this film to anyone who is interested in the psychology of death, of the reality of suicide and those who commit it, and just how serious the act of taking one's own life can be.

Very worth watching the preview on YouTube here, although it is only an account by two witnesses:


Between 1937 and 2012 an estimated 1,600 bodies were recovered of people who have jumped from the Golden Gate Bridge in the San Francisco Bay Area in the United States.  Of those attempting to commit suicide, the impact from the fall kills 98 percent of people as they enter the water.  As of 2005, 26 people were estimated to have survived after jumping.  In 2013, 118 potential jumpers were talked down from their attempt and did not jump.
Posted by blackCABproductions at 2:19 PM