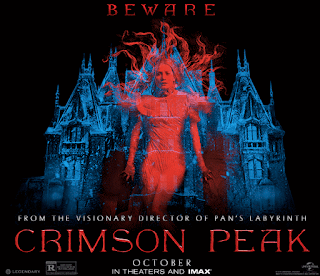 Saw CRIMSON PEAK this morning. Hmmmm...I liked it, generally speaking, but as the main protagonist says in the beginning of the film, in regard to her novel: It isn't really a ghost story, it's a story with ghosts in it. And that's pretty much what the movie is also

CRIMSON PEAK is a actually a Victorian era, Gothic, twisted, incestuous romance with some ghosts in it. Ghastly ghosts that I couldn't understand when they speak-groan-growled and don't really do a whole lot to move the plot along. Regardless, the film is beautiful to look at –– the costumes, the set pieces, and the actors in them –– and when there is violence it is hard hitting and bloody-grisly as hell. But the centerpiece mansion, nicknamed "Crimson Peak", is truly outstanding. A haunted house in ruins that is to die for. A must see!
Sadly, however, as the film progresses it becomes a bit silly and laughable at times. A lot of over-the-top drama and gore for the sake of over-the-top drama and gore.
SPOILER ALERT here, although a very tiny one...
What I thought was hilarious is when our protagonist has an unsurvivable two-story fall, hits a lower banister that looked like it snapped her spine from her waist (extremely well done!), and then hits floor and she's out. Next scene she's coming around from a sedative and the doctor has just set her broken leg. Hmmmmm...ok. Then she proceeds to walk, fight the baddies, do some stair climbing, and even some near running on this just-set-and-bandaged limb. Wow! She is one tough bird! She even overcame her spine snapping on the banister. Impressive!
So...the best reasons to see CRIMSON PEAK are the costumes, sets, actors and the fabulous mansion. Just know that the movie becomes a bit of a bloody cartoon in the end.  Enjoy!
Watch the trailer here:
https://www.youtube.com/watch?v=4zBlG8Lv01k
Posted by blackCABproductions at 4:31 PM