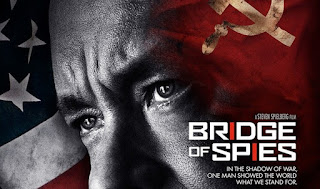 I was again reminded what a world-class filmmaker Steven Spielberg really is once you pry him away from his blockbuster, crowd-pleaser, make-another-billion-dollars flicks. Or maybe it's his movie machine that does it all for him now. Either way, BRIDGE OF SPIES is an outstanding film and absolutely beautiful to look at. The attention to 1950/60s error "everything" is mesmerizing. I can't imagine making a period piece and getting in all that detail.

The film is based on these true events of the cold war error: we capture a Russian spy in the US; a lawyer, James Donovan –– played with cool, yet compassionate, intensity by Tom Hanks –– is saddled with the onerous (and cold war America dangerous) task of defending the spy; one of our U2 spy planes is shot down by the Russians and the US pilot is captured; there needs to be an exchange ASAP.

I won't say more than that about the plot of the story. I will say, however, that the film is a slow burn –– intense at times –– cold war drama that is a truly fascinating and frightening piece of American history. A time when the Russians were as afraid of us as we were of them, and the button was ready to be pushed at any minute.

What is unique about BRIDGE OF SPIES is how well Spielberg is able humanize the Russian spy, Rudolph Abel –– portrayed by actor Mark Rylance –– with such odd humanity. Rylance is impossible to take your eyes off of when he's on the screen, and often steals the scene from Hanks. His interpretation of Rudolf Abel as such a humble, peaceful, and quiet man is at times disturbing, at times funny, and at times heart wrenching. I loved this Russian spy by the end of the film and was terrified for his life, as well as the lives of the Americans being exchanged, and also the life of Tom Hanks' James Donovan, who is trying to do the right thing at all costs, while struggling to cope with the evils of chaotic East Berlin as "the wall" is quite literally going up.

I highly recommend BRIDGE OF SPIES. I predict, we'll definitely be seeing it at the Academy Awards this coming year. Enjoy the trailer.