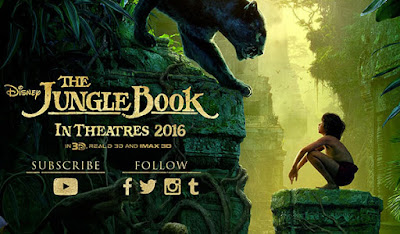 I saw the trailer for the upcoming live-action THE JUNGLE BOOK to be released next year, 2016. Wow! This does look fantastic. And directed by who? Yup, Jon Favreau of IRON MAN and COWBOYS & ALIENS fame. When I saw him starring in the now indie cult film SWINGERS back in 1996, I never thought these big studio action and effects films was where this guy was headed.

Let's see what happens, but if THE JUNGLE BOOK plays its cards right, it could become a new CGI masterpiece and childrens' classic reinvented.

Enjoy the trailer here:
https://www.youtube.com/watch?v=5mkm22yO-bs
Posted by blackCABproductions at 8:27 AM