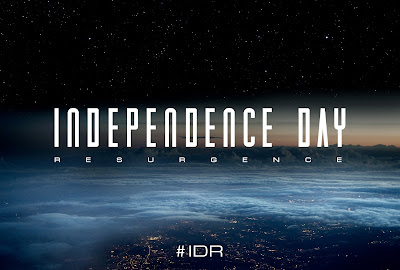 Films on my "guilty pleasures" list include most of director Roland Emmerich's epic disaster films, such as INDEPENDENCE DAY, DAY AFTER TOMORROW, and 2012.  It seems I can't ever get enough of watching the world be raped and destroyed, thus I regularly forgive Mr. Emmerich for any flaws in plot, characters, or story simply because the guy is the best at taking out the planet and the human race with explosive and cataclysmic elegance (that was a poetic way of saying "amazing special FX").  Now it seems I have a new end of the world to look forward to in the summer of 2016, INDEPENDENCE DAY: RESURGENCE.

The Synopsis:
Using recovered alien technology, the nations of Earth have collaborated on an immense defense program to protect the planet. But nothing can prepare us for the aliens' advanced and unprecedented force. Only the ingenuity of a few brave men and women can bring our world back from the brink of extinction.

Emmerich promises ID: RESURGENCE will be far more spectacular than the first film.  I hope so.  I've been aching to see the world destroyed in new high-fashion, for a while now.

Posted by blackCABproductions at 7:46 AM