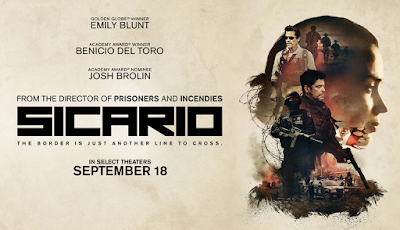 I really liked this film!

I was expecting more of a slice-of-life in the FBI/DEA/druglord genre (with mucho torture and Colombian neckties), but what I got was far more satisfying. True that the film is a character study, of sorts, it also meanders somewhat –– but then you understand that it really isn’t –– it's simply, subtly, leading you through a string of very intense events until you have an epiphany at the end, and say, "Wow! I just watched a really great story that unfolded without me, the viewer, quite realizing it was happening."  And believe it or not, this film was touching at times –– even in the bitter finale –– in the most unexpected ways.  Mostly this comes through actress Emily Blunt, who is quite good (and quite sexy hot; I think I have a new movie crushgirl.)  But the compassionate qualities also filter through the hardcore (is he an assassin or not?) character played perfectly by Benicio del Toro.

Is there violence?  Plenty of it.  But I never felt it was violence for the sake of violence.  It was real, and pertinent to story, and even poignant.  Does the film paint the drug trade and those who fight it in the deepest zones, black and white?  No.  Gray at best is what this underworld is.  Are the bad guys bad?  Yes, very.  Are the good guys good?  Hmmmmm...let's just say it this way, you feel for them and also feel glad they are on your side.  I felt like I was on theirs.

I highly recommend SICARIO to everyone.  Even those who normally wouldn't watch a drug cartel/DEA film.  This is an unexpected, very personal story.

Posted by blackCABproductions at 10:05 AM