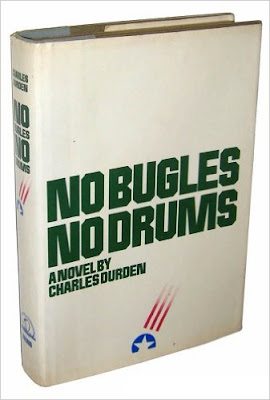 For some reason I woke up this morning thinking about author CHARLES DURDEN, who I met, knew, and hung out with many years ago after moving to Los Angeles in 1995. His first novel, NO BUGLES, NO DRUMS was published in 1976 and was considered one of the best novels written about the Vietnam War––Charlie was in that war as a journalist and correspondent.
At the time I met Charlie, he was essentially broke and dying of cancer; NO BUGLES, NO DRUMS was out of print, but he had also published a second novel with the same character, titled: THE FIFTH LAW OF HAWKINS. I was able to find a hard copy of that book and quite enjoyed it. Charlie brought back his main character from No Bugles, JAMIE HAWKINS, a "writer and self-described commentator on life's absurdities who downs tequila as if it were water, smokes dope when he can get it, mouths off with no provocation, and beds any female who catches his fancy." 3:) Read the KIRKUS review here, if you'd like to know more about this offbeat, political "irreverent, hilarious thriller".:
https://www.kirkusreviews.com/book-reviews/charles-durden/the-fifth-law-of-hawkins/
The point of this long story about knowing Charlie Durden is that he was a super nice, down-to-earth, cynical-as-me, kind of guy who even read Part One and Two of my novel PUZZLEMAN (yet to be published at the time) and called me one night during rehearsals for my film SCREAM FOR ME (back in 1998, I think). He said he wasn't sure what it was he had just read, but that it was far out, he loved it, and that I was on to something that could be great. I was blown away!
That all came back to me this morning as my eyes were barely coming open and I was thinking how I needed to get back to finishing my own new story. But first I thought I would look for his novel NO BUGLES, NO DRUMS again. See if, after so many years since Charlie's passing, that some books had surfaced at a price less than $50 to $100. I found some very reasonably priced hardbacks in "good" condition through Amazon––that were "too good" to pass up––and ordered a copy. Woohoo! I just wish Charlie was still here to autograph it. RIP Charles Durden, wherever you are––you were a wonderful writer, a sincere and regular kind of guy (like his character Jamie Hawkins, he also loved his tequila Patron), and a great inspiration.  And now my DURDEN collection will finally be complete.
- 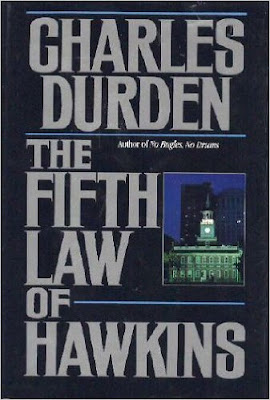 Posted by blackCABproductions at 9:20 AM