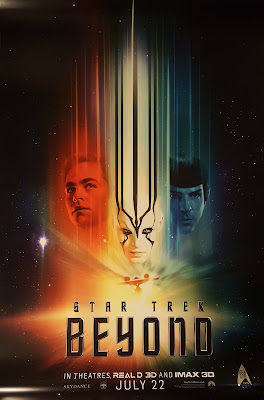 Just saw STAR TREK: BEYOND, and...well...looks like they'll need still "another" new USS Enterprise spacecraft. lol
But that's hardly a spoiler for a STAR TREK movie these days.
I really enjoyed the film overall! But, as some critics have said, thanks to director JUSTIN LIN––who has helmed 3 of the FAST & FURIOUS films––the approach, much of the time, is a little too fast and furious, resulting in a "blur of space babble and battles". :D Well, all I can say is stay sharp and try not to blink. Some logistics when the action gets rolling are difficult to follow. Who's where––wait––wh-wha-what?
SOFIA BOUTELLA is quite sexy as the wayward, martial-arts, high-kicking alien JAYLAH. And the rest of cast is perfect in their roles, as usual. The STAR TREK crew-mate humor is rampant throughout and usually spot on.
More sci-fi than humanistic, this go around, the evil aliens' technology is definitely far out––I'm still trying to understand some of it and also what the ultimate weapon really was.
Without J.J. ABRAMS directing this installment, I have to admit the film somehow lost a bit of its high tech gloss, and was blatantly lacking the spectacular and stylized lens flares that ABRAMS loves to put into almost every shot.
All that being said, I think the previous film (STAR TREK: INTO DARKNESS) is the best of the current franchise, but STAR TREK: BEYOND is still a great time and doesn't slow down for a minute. Check it out if you love STAR TREK and especially a little harder sci-fi edge.  You won't be disappointed.
Enjoy the trailer here:
https://www.youtube.com/watch?v=Tvq3y8BhZ2s 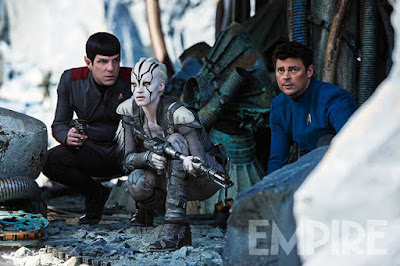 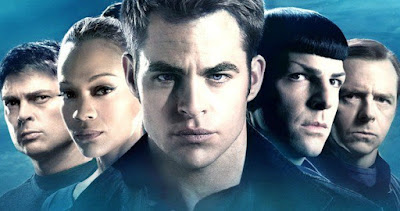 Posted by blackCABproductions at 1:10 PM